I am not sure what to say about Eve’s Bayou; I found it slightly underwhelming. It is a good story, its fantastic elements are well developed and its characters are sufficiently well rounded. Except that, I don’t know why, I found Eve (the character) not entirely convincing (Jurnee Smollett, on the other hand, was very good).  The “mirror scenes” are somewhat risky, but I think they work well in the context of the story; one needs to accept them literally, which makes them more interesting than as a mere convention.  I would be interesting in hearing opinions about this movie and suggestions on what elements of it I should be paying closer attention to. 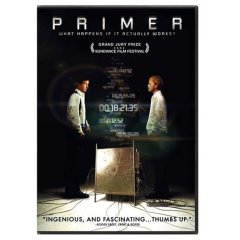 I like science-fiction. That being said, I hesitate about calling science-fiction most of what is classified as such; I guess I mostly identify sf with hard sf. Primer classifies without hesitations. This is a rare gem; it is a challenging film, and multiple viewings are probably required to fully appreciate it. Maybe some of the difficulties are not intentional, and rather the result of the inexperience of the director, this being his first feature film (a small screen telling us the date of some of the scenes would have helped every now and then). But it is worth working through this movie, and slowly unfolding its narrative.

You may have noticed I didn’t say what the movie is about, and I did the same in my previous post. But everybody knows about All the president’s men, I expect. With Primer, on the other hand, I find that part of the charm is to slowly realize what the story is about.

All the president’s men

A great movie. This is a very good example of how to present a political thriller in an intelligent fashion, without the usual over-the-top effects and plots Hollywood so much likes. The language it uses (the storytelling conventions, if you wish)  is mostly absent from films nowadays: the first scene is 30 seconds of white space, for example, a good amount of information is written, and a large part of the story consists of phone conversations, and yet it is quite entertaining and does not feel stilted. Highly recommended.

(So this is what this will mostly be like: I say a few things about what I’ve seen or read. Of course, there may be other, different, postings along the way.)

The key tool to use this notion is the enumeration theorem.

This material should just be a generalization of notions and results studied in 117a. The following references may be useful for this part of the course: