I just learned from the textbook that apparently whether the series

converges is still open, which I find rather surprising. The reference the book lists is the book Mazes for the Mind by Clifford Pickover, St. Martin Press, NY, from 1992, but Dr. Pickover has informed me that he believes the problem is still unresolved; he also discusses it in his book The Mathematics of Oz, Cambridge University Press, 2002. I would be very curious to hear from updates or suggestions, if you have any.

Here is a slightly technical (and very quick, and not particularly deep) observation: The issue seems to be to quantify how small

is, when it is small, or more precisely, how sparse the set of values of

is for which the sine function is “significantly small.” One could start by looking at

is small for some

, so we are led to consider the standard convergent approximations to

is close to, but slightly larger than,

actually is, something about which I don’t know of any results.

Below I display some graphs for the partial sums of the series. Let

. In the other graphs,

goes up to 300, 1000, and 100000. (Thanks to Richard Ketchersid for the code.) It is not clear to me that the last graph is accurate or that it allows us to draw any conclusions (it certainly seems to suggest that the series converges to a number slightly larger than 30); it may well be that further jumps are beyond the range I chose, or that the approximations Maple uses in its computations are not fine enough to examine very large values of the series.

Notice that examination of just the first few values of

would suggest that the series converges to a  number near 4.8. In fact, for many “natural” series, the 300-th partial sum gives an accurate approximation of their value. However, as the third graph reveals, a jump suddenly occurs, slightly after we pass the 350-th partial sum. The jump occurs at

notice that 355 is very close to an integer multiple of

Even though the fourth graph does not reveal any further jumps, it is not clear that they won’t occur at certain values of 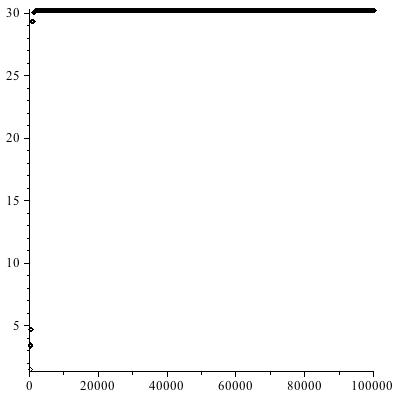 This entry was posted on Monday, November 10th, 2008 at 3:55 pm and is filed under 175: Calculus II. You can follow any responses to this entry through the RSS 2.0 feed. You can leave a response, or trackback from your own site.