Somewhat informally, a proposition is a statement which is either true or false. Whichever the case, we call this its truth value.

Example 1 “There are infinitely many primes”; “

”; and “14 is a square number” are propositions. A statement like “

is odd,” (a “propositional function”) is not a proposition since its truth depends on the value of

(but it becomes one when

is substituted by a particular number).

A word of warning is in order: The precise mathematical meaning of a connective (say,

) should not be confused with the somewhat ambiguous meaning of the word (say, “implies”) used to name it. The intended mathematical meanings of the connectives are as follows:

We can summarize the meanings of these connectives using truth tables: 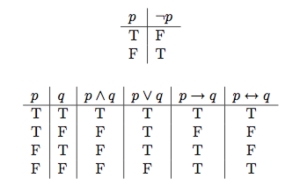 We now proceed to develop the theory of propositions in a rigorous setting.

In order to rigorously prove results about the structure and truth of propositions and their connectives, we begin by developing a formal language, the language of propositional logic. Later, just as in the example of the tree system presented before, we will assign a semantic to this language.

Definition 1 In the language of propositional logic we have the following list of symbols:

It does not matter what the propositional variables or the connectives actually are, for example, we can begin with any (countable) infinite set, and decide that its elements are the propostional variables. Our only requirement is that the symbols

are distinct from one another, and from the propositional variables.

We could also have symbols for

and for additional connectives. In order to simplify the presentation, I will restrict myself to the language above.

As before, a string or word is any finite sequence of the symbols in the language, including the empty string. Its length is its domain, just as before. Unlike the example of the tree-system, now we are only interested in certain strings, those that “represent” formulas. There are several conventions we could follow; for example, we could state that

are formulas. To simplify the presentation, we restrict ourselves to only one of these options.

We will refer to the “grammatically correct” strings (those formed according to the conventions below) as well-formed formulas (wffs) or just formulas.

is a wff exactly when there is a finite sequence

(called a parsing sequence) such that

one of the following holds:

Remark 1 Just as in the case of the tree system, we have not yet assigned any “meaning” to any of the symbols in our formal language. Eventually, we intend to interpret symbols such as

in a way analogous to the propositional connective “implies,” at present they are simply symbols that we are manipulating formally.

We can prove properties of formulas by induction on the length of a formula. Suppose

is a property of a formula

has the same number of left and right parentheses.” If

holds for all formulas of length 1 (i.e. the propositional variables) and whenever

holds for all formulas

then it holds for all formulas of length

we may conclude, by induction, that

holds for all formulas.

However, because of the way formulas are defined, it is most useful to use another form of induction, sometimes called induction on the construction of wff (or just induction on formulas):

be a property of formulas

holds for all formulas

We can prove the validity of this procedure using standard mathematical induction, and the existence of a parsing sequence for any wff.

Example 3 One can easily prove, using this form of induction, that every formula

has the same number of left and right parentheses. This result can be used to show that certain strings, for example

are not wffs, because they have unequal numbers of left and right parentheses.

‘s or else has more left than right parentheses. Another easy induction shows that no formula can be empty or just a string of

‘s, so using also the previous example, no proper initial segment of a wff is a wff.

This can also be used to show certain strings, for example,

are not wffs, as they contain proper initial segments that are wffs (in the example,

). Similar methods can be used for other non-wffs.

While parsing sequences are not unique, there is a sense in which all alternative parsing sequences offered for a given wff are “the same”: they break the wff down in the same way, to the same components, albeit in a different order. Using induction on formulas, we can prove that this will always be the case. This is called unique readability.

Theorem 3 (Unique Readability Theorem) Every wff is in exactly one of the forms:

Proof: By induction on the construction of formulas, it is straightforward that any formula must be of one of these forms. To prove uniqueness first notice that no wff can be in more than one of the forms (1), (2), (3). Obviously no two propositional variables are the same, and if

First notice that, by eliminating the left parenthesis, we have that

From this it follows that either

is an initial segment of

or vice versa. If

is a proper initial segment of the other, which is impossible, as they are both formulas. So we must have

Remark 2 Similar arguments would have given the same result if we had followed a different convention when defining formulas. For example, if we had stated that whenever

are formulas, then so is

However, not all conventions would work. For example, if we had used

a formula such as

the main connective and in (3) we call the

connecting the formulas denoted above by

the main connective is the third “

it might be hard to recognize immediately which is the main connective. Consider for example the following formula:

”). There is however an easy algorithm for determining the main connective: In the formula

One can use the unique readability theorem to justify the following principle of definition by recursion on the construction of formulas:

be a set and let

be given functions. Then there is a unique function

from the set of all formulas into

Without unique readability, the existence and uniqueness of

would be called into question: If there were two different ways of breaking down a formula, then the corresponding compositions of the

for the same formula. But now that we know unique readibility,

is well defined and unique.

We will next discuss an algorithm for verifying that a given string is a formula.

be a propositional variable not occurring in

the string we obtain from

by substituting every propositional variable by

containing only the variable

be the string obtained from

contains no substring (i.e. a string contained in

as a consecutive sequence of symbols) of the form

then the length of

is strictly smaller than that of

Now starting with an arbitrary string

and then define recursively

This process stops when we hit

has no substring of the above form. This must necessarily happen since otherwise we would have an infinite decreasing sequence of lengths, which is impossible.

We then have that if

is a formula, and otherwise it is not.

Exercise 1 Prove the correctness of this algorithm.

Sometimes in practice, in order to avoid complicated notation, we adopt various abbreviations in writing wff, if they do not cause any confusion.

First of all, we write

instead of the formula abbreviated by

Also, we usually omit outside parentheses: We write

We adopt an order of preference between the binary connectives, namely

where connectives from left to right bind closer, i.e.,

So if we write

and if we write

Finally, when we have repeated connectives, we always associate parentheses to the left, so that if we write

and if we write

All these are conventions that we follow (informally) in practice, although formally we have not introduced symbols to the language, or extended the notion of formula, and are just writing the unabbreviated forms each time.

We now describe a formal calculus of proofs. As in the example of the tree system, we start with axioms and use rules of inference to deduce consequences.

This style of arguing in formal logic, using axioms and rules, was introduced by David Hilbert and his school.

Hilbert was born in Königsberg, Prussia, in 1862, and died in Göttingen, Germany, in 1943. He is one of the most important mathematicians of the late 19-th and early 20-th century. A strong advocate of nonconstructive methods, this probably started with his work on “invariant theory,” where he proved a Basis Theorem without exhibiting an explicit basis. The paper appeared in Mathematische Annalen in 1888. (The result states that in any number of variables there is a finite set of generators for the invariants of quantics. A quantic is a symmetric tensor of a given degree constructed from tensor powers of a (finite dimensional) vector space. Invariance is measured under invertible operators of the space in itself.)

Gordon, the world expert in invariant theory, strongly opposed in vain to the publication of Hilbert’s result, due to its nonconstructive nature. On the other hand, Klein said of this result that “I do not doubt this is the most important work on general algebra that the Annalen has ever published.”

Hilbert’s work in number theory led to his book on the theory of algebraic number fields, recently translated into English. He started his work on logic with the publication in 1899 of the Grundlagen der Geometrie, where he advocates the axiomatic approach to mathematics.

In 1900 he delivered the invited address “Mathematical problems” to the Second International Congress of Mathematicians in Paris, where he listed 23 problems that in his opinion were essential for the progress of mathematics. From here comes his dictum “Here is the problem, seek the solution”. The inscription on his tombstone, “We must know, we will know” comes from a speech in Königsberg in 1938. His address can be found in the Bulletin of the AMS, vol 37, number 4 (2000).

His work on integral equations and calculus of variations led to functional analysis and the concept of Hilbert space. He also solved Waring’s problem, a well-known problem in number theory. His work in logic resulted in the development of proof systems and lead to the incompleteness theorems of K. Gödel.

A (logical) axiom is any formula of one of the following forms:

We also have a rule of inference called modus ponens or MP: “From

” In formal calculi, a rule such as this for deriving one formula from others given, is sometimes written as follows:

be any set (finite or infinite) of formulas. A formal proof from

is a finite sequence

of formulas such that each

is either a logical axiom, belongs to

or comes by applying modus ponens to some

). We call this sequence a formal proof of

Definition 6 If there is a formal proof of a formula

is a formal theorem of

Also notice that if

since the formal proofs can simply be concatenated. Finally,

implies that there is finite

Here is a formal proof of

In the proof above, I have listed next to each formula the reason why it can be written down. Just as in the case of proofs in the tree system, formally, the proof is just the sequence of formulas, without the companion explanations:

Typeset using LaTeX2WP. Here is a printable version of this post.

This entry was posted on Monday, September 7th, 2009 at 3:01 pm and is filed under 502: Logic and set theory. You can follow any responses to this entry through the RSS 2.0 feed. You can leave a response, or trackback from your own site.