The third midterm is here.

Problem 1. Consider the region bounded below by the curve

and above by the

-axis. A rectangle is inscribed in this region in such a way that one of its sides lies on the

-axis and the other two corners are on the parabola. Find the dimensions of the sides of the rectangle that maximize its area.

The graph above (click to enlarge) shows the curve

together with both axes, and a rectangle as required. I have marked the coordinates of one of the corners of the rectangle, as

are the dimensions of the sides of the rectangle, with

the length of the horizontal sides. Then the area of the rectangle is

, and in order to apply calculus to maximize this function, we first express

denotes the area of the rectangle, as a function of

Note that, by our convention,

, it must be the case that

, it follows that this value of

gives us a local maximum of the function

, and therefore the only maximum in the interval

, which is the range of values that

can take and be a length of a rectangle as required.

and the maximum area is

Problem 2. Two (very long) roads cross each other at a point

. One runs north to south, and the other runs east to west. Car

is driving north along the first road, and car

is driving east along the second road. At a particular time, car

is 30 miles to the north of

and traveling at 50 m/h, while car

and traveling at 65 m/h. How fast is the distance between the two cars changing?

The graph above (click to enlarge) shows the situation described in the problem. Given an arbitrary time

of intersection of the roads, by

, all computed at time

The problem is asking us to compute

, by the Pythagorean theorem. Then

with the property that

coincides with the slope between the endpoints of

The slope of the line between the endpoints of

so we need to solve the equation

For this, note that 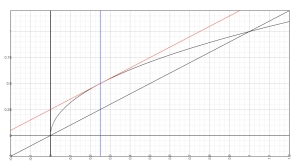 and the line tangent to

. I have also shown the line

. Note how the tangent line is indeed parallel to the given secant line.

. Show the values of

obtained by applying Newton’s method to this equation, starting with

Newton’s method begins with a guess

) and iteratively improves it, approaching a solution of the equation

. The iterative process is given by the equations

, i.e., in our iterative process we have 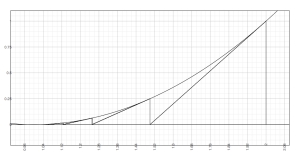 The graph above (click to enlarge) shows the function

, and the “staircase” produced by applying Newton’s method starting with

From results in class, we know that if

in the common domain of

then (on each interval where both

are defined) there is a constant

: From the formula above, we have that

The two graphs below (click to enlarge) show first

, with a little circle indicating the position of the point

This entry was posted on Sunday, November 21st, 2010 at 1:25 am and is filed under 170: Calculus I. You can follow any responses to this entry through the RSS 2.0 feed. You can leave a response, or trackback from your own site.