My student Tommy Chartier completed his M.S. in December. 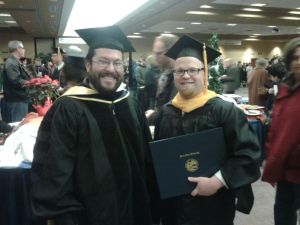 Here is a copy of the nice slides he used in his defense.

In his thesis, Coloring problems, Tommy studies some graph coloring problems. I wanted to emphasize the variety of problems that the title encompasses, so the examples he presents are all very different from one another.

1. First, Tommy talks briefly about the coloring number of the plane (the notoriously difficult Hadwiger-Nelson problem):

What is the smallest number of colors needed to color the plane, if no two points at distance 1 are to have the same color?

An excellent reference for this problem is the highly entertaining “The mathematical coloring book“, by Alexander Soifer.

There is a well-known finite graph, using 7 vertices, showing that at least 4 colors are needed. Tommy gives an argument showing that, on the other hand, any distance-1 graph with at most 6 vertices (in the plane) is 3-colorable. One can find this result in the literature; the reference is usually

Unfortunately, although the articles of the Bulletin are available online, problems and solutions are not, so we reproved it. It would be interesting to see how far one can generalize this result. I know of only one paper that has attempted this,

Besides the result in the title, Pritkin shows that any such graph of order at most 12 is 4-colorable. One should be able to improve this result with some work.

2. Tommy also presents some results we obtained during a reading course he took with me as an undergrad, on regressive Ramsey numbers, based on my paper:

in particular, Tommy presents his example showing that what I call

in the paper is precisely 85.

3. The main work on the thesis is on a problem that I find fascinating. The question (still open) originated on MathOverflow, and can be found here.

Is it true that for every

colors, in such a way that, for every

all have different colors?

-core, denote the set of positive integers whose prime factorization only involves primes less than or equal to

. As a first observation, the question above has a positive answer for

iff it has a positive answer when

. In fact, if there is a coloring of

as in the question (a satisfactory

-coloring), then there are continuum many such colorings of

Tommy looks for sufficient conditions ensuring the existence of  satisfactory

. The first condition (identified by Victor Protsak) is number theoretic:

Theorem 1. Suppose that there is a number

is prime, and the numbers

are all different modulo

is prime, then the other condition is automatically satisfied. For other values of

, this is no longer the case. In fact, it is shown in Tommy’s thesis that

can never be 3, for example, and that for any

there are only finitely many possible

There is a more general approach, suggested for example by Ewan Delanoy.

-homomorphism is a bijection

Theorem 2. If there is a partial

-homomorphism, then there is a satisfactory

This is more general: If

are as in Theorem 1, then the

form a multiplicative group isomorphic to

-homomorphism can be easily built. On the other hand, Tommy exhibits examples of partial

-homomorphisms that do not come from any such prime

Even more generally, we can replace

with any abelian group

: If there is a bijection

, then there is a satisfactory

. It is interesting to ask whether there is such a bijection, even without this requirement. In

it is shown that

must be abelian if

is odd, but whether this is always the case seems to be open.

it is shown that

is least such that there is no such bijection, for any

for which there is no such bijection. We call such

groupless. It is currently open whether any of them admit a satisfactory coloring.

Such colorings would by necessity be non-multiplicative and currently we do not have a framework to explain where they would come from, see here.

I have found examples of non-multiplicative colorings (for

), so we cannot currently rule out that there are satisfactory colorings for every

.  On the other hand, even though my examples are non-multiplicative, one can define multiplicative colorings from them. The situation for

is very much open.

Many interesting questions remain. For example, it is possible that, for

large enough, there are

as in Theorem 1 iff either

are prime. On the other hand, by a result of Kummer and Mills, see

we know that for

there must be such a

, but extensive computer search has not found it. As an indication of the difficulties of the search, the smallest

, and we expect any

to be orders of magnitude larger.

It is worth mentioning that the difficulties found with the problem were to be expected. As shown in the thesis, the existence of a satisfactory

of the following result:

The Balasubramanian-Soundararajan theorem solved a conjecture of Graham from 1970. The proof appears in

The work of Forcade-Pollington mentioned above was carried out in connection with this conjecture.

It would be nice to revisit the problem in the future. I think there is still much to say about it.

This entry was posted on Thursday, January 12th, 2012 at 1:57 am and is filed under Students. You can follow any responses to this entry through the RSS 2.0 feed. You can leave a response, or trackback from your own site.

One Response to Coloring problems