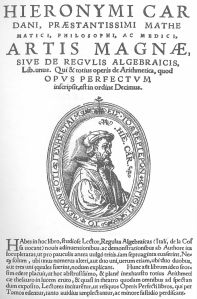 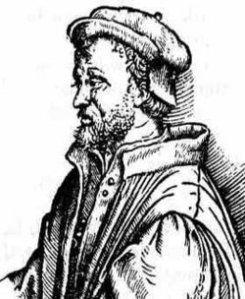 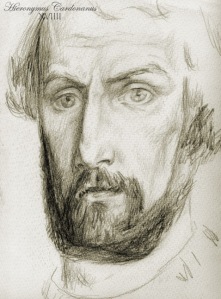 Ars Magna, whose first edition dates back to 1545, is an Algebra book, and generally considered one of the key scientific texts of the XVI century. It contains the earliest recorded formulas for solving cubic equations. It is also the subject of one of the earliest priority disputes in the history of mathematics.

Cardano attributes the method leading to the formulas to  Scipione del Ferro (1465–1526), but the general result is due to Niccolò Fontana, called Tartaglia, “the stutterer.”

However, Cardano does not recognize the formulas he uses as originating with Tartaglia (1499/1500–1557), who wanted to keep his method private, and had apparently disclosed it to Cardano under sworn secrecy.

Cardano acknowledges help by his student Ludovico Ferrari (1522–1565), who also discovered the formula for solving quartic polynomials.
Tartaglia’s description of the exchange that led to his disclosure of the method is highly entertaining, and can be found here. I quote the relevant part. For a slightly different translation of some of this exchange, see “Abstract Algebra“, by Robert Redfield. 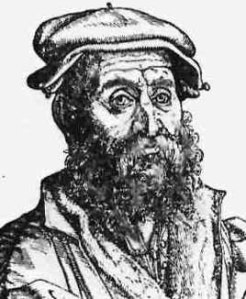 Cardano: And I also wrote to you that if you were not content that I should publish them, I would keep them secret.

Tartaglia: Enough that on that head I was not willing to believe you.

Cardano: I swear to you by the sacred Gospel, and on the faith of a gentleman, not only never to publish your discoveries, if you will tell them to me, but also I promise and pledge my faith as a true Christian to put them down in cipher, so that after my death nobody shall be able to understand them. If you will believe me, do; if not, let us have done.

Tartaglia: If I could not put faith in so many oaths I should certainly deserve to be regarded as a man with no faith in him; but since I have made up my mind now to ride to Vigevano to the lord marquis, because I have been here already three days, and am tired of awaiting him so long, when I am returned I promise to show you the whole.

Cardano: Since you have made up your mind at any rate to ride at once to Vigevano to the lord marquis, I will give you a letter to take to his excellency, in order that he may know who you are; but before you go I should wish you to show me the rule for those cases of your, as you have promised.

Tartaglia: I am willing …

[Tartaglia then gave Cardano his rule in a poem he had written.]

When the cube and things together
Are equal to some discreet number,
Find two other numbers differing in this one.
Then you will keep this as a habit
That their product should always be equal
Exactly to the cube of a third of the things.
The remainder then as a general rule
Of their cube roots subtracted
Will be equal to your principal thing
In the second of these acts,
When the cube remains alone,
You will observe these other agreements:
You will at once divide the number into two parts
So that the one times the other produces clearly
The cube of the third of the things exactly.
Then of these two parts, as a habitual rule,
You will take the cube roots added together,
And this sum will be your thought.
The third of these calculations of ours
Is solved with the second if you take good care,
As in their nature they are almost matched.
These things I found, and not with sluggish steps,
In the year one thousand five hundred, four and thirty.
With foundations strong and sturdy
In the city girdled by the sea.

This verse speaks so clearly that, without any other example, I believe that your Excellency will understand everything.

Cardano: How well I understand it, and I have almost understood it at the present. Go if you wish, and when you have returned, I will show you then if I have understood it. 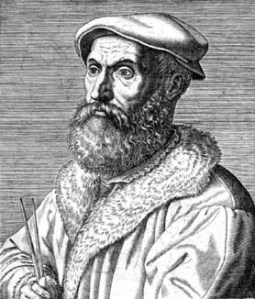 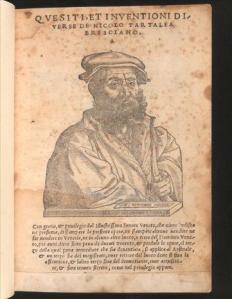 Tartaglia’s approach is slightly different from the one we presented in class, as the idea of studying symmetries of the set of roots would not appear until much later, with the work of Galois and Abel.

His method, and a second approach, based on trigonometric identities, are discussed in the first homework set.

Ferrari’s method for the quartic led to much work trying to generalize it to quintic equations and beyond. Galois work shows that this is impossible in general, and led to the isolation of two key notions: Groups and, specifically, solvable groups.

We will discuss them in due time.

I have been unable to find a portrait of Ferrari, and will be thankful if you let me know of one.

This entry was posted on Monday, January 23rd, 2012 at 1:07 pm and is filed under 305: Abstract Algebra I. You can follow any responses to this entry through the RSS 2.0 feed. You can leave a response, or trackback from your own site.