As mentioned in lecture, Hilbert’s third problem was an attempt to understand whether the Bolyai-Gerwien theorem could generalize to 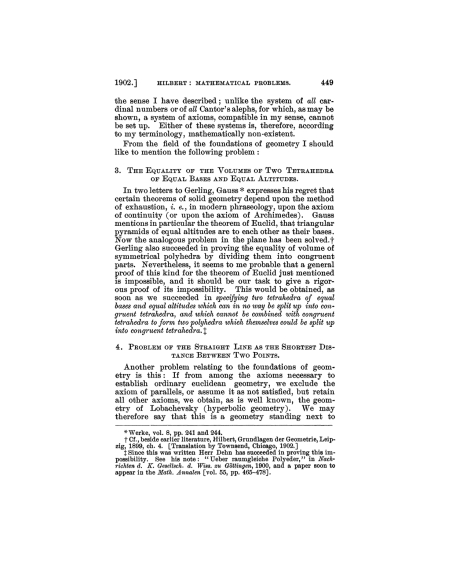 3. THE EQUALITY OF THE VOLUMES OF TWO TETRAHEDRA OF EQUAL BASES AND EQUAL ALTITUDES.

In two letters to Gerling, Gauss expresses his regret that certain theorems of solid geometry depend upon the method of exhaustion, i.e., in modern phraseology, upon the axiom of continuity (or upon the axiom of Archimedes). Gauss mentions in particular the theorem of Euclid, that triangular pyramids of equal altitudes are to each other as their bases. Now the analogous problem in the plane has been solved. Gerling also succeeded in proving the equality of volume of symmetrical polyhedra by dividing them into congruent parts. Nevertheless, it seems to me probable that a general proof of this kind for the theorem of Euclid just mentioned is impossible, and it should be our task to give a rigorous proof of its impossibility. This would be obtained, as soon as we succeeded in specifying two tetrahedra of equal bases and equal altitudes which can in no way be split up into congruent tetrahedra, and which cannot be combined with congruent tetrahedra to form two polyhedra which themselves could be split up into congruent tetrahedra.

Hilbert’s student Max Dehn solved the problem in 1901 with the introduction of what we now call Dehn invariants:

Theorem. If two polyhedra in

are equidecomposable into polyhedra, then they have the same volume and the same Dehn invariants.

with the same volume and the same Dehn invariants are equidecomposable into polyhedra.

A couple of years ago, Richard Schwartz, from Brown university, wrote a couple of very nice notes explaining both Dehn’s and Sydler’s theorems. He also developed a Java applet illustrating Sydler’s argument (for his “Fundamental lemma”). They can be downloaded here.

This entry was posted on Monday, January 23rd, 2012 at 1:32 pm and is filed under 515: Analysis II. You can follow any responses to this entry through the RSS 2.0 feed. You can leave a response, or trackback from your own site.