This one is incredible. No beard, and I do not look yet like an orca. 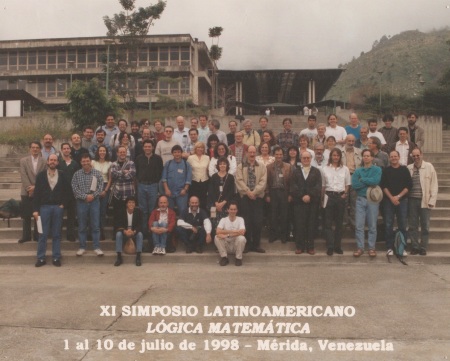 I’m in the last row, sort of in the middle. Xavier Caicedo is on the second row, to the left. My friend Juan Carlos Rivera is on the last row as well. I should probably stop now.

I ran into this picture a few days ago, when looking at the old photos from the Martin Conference. I posted here the group picture from that conference. John Steel should be posting the other pictures soon (well, I’ve been waiting since 2001, so we’ll see), or I may post them if that ends up not happening.

This one is the conference photo from the Logic Colloquium 2000. The website has many other pictures available as well. It was an interesting meeting.

Paris, July 23 – 31, 2000. The meeting site will be the Sorbonne, where David Hilbert presented his famous list of problems at the International Congress of Mathematicians in August 1900.

As I recall, at the opening we listened to a recording of part of Hilbert’s address, including his Wir müssen wissen. Wir werden wissen.

I like this picture very much. You can see me behind Joel Hamkins, in what seems to be row eight. (I believe I met Joel and his wife, Barbara Gail Montero, at this conference.) Paul Larson still has hair.

This week (May 20-May 24) I am in Palo Alto, at the American Institute of Mathematics, for the third year of a SQuaRE meeting on Descriptive aspects of Inner model theory. The previous two meetings are mentioned here and here. See also this post on some of our results.

This time two other SQuaRE meetings are happening simultaneously, one on the Possible shape of the numerical ranges for certain classes of matrices, and one on Singular cardinal combinatorics. Here you have the two set theory-related groups:

(If someone has a version in higher resolution, or pictures of the conference, please contact John Steel, or myself.)

END_OF_DOCUMENT_TOKEN_TO_BE_REPLACED

My student Summer Kisner completed her M.S. this term, and graduated on Saturday.

Here is a copy of the slides she used on her defense. (The slides display incorrectly on my computer, but it seems to be a problem on my end. If it is not, please let me know, and I’ll see what I can do.)

are partitioned into finitely many sets,

(not necessarily different), all of them in

. One usually describes this in terms of colors: We color the positive integers with finitely many colors, and there is a monochromatic triple

This result is a cornerstone of Ramsey theory. It was significantly generalized by Rado (using the notion of partition regularity), and is connected to van der Waerden’s and Szemerédi’s famous results.

Nowadays, Schur’s theorem is typically proved as a corollary of Ramsey’s theorem. This is usually stated in terms of graphs, but I will use the notation from the partition calculus. Let

denote the collection of

-sized subsets of the set

is infinite, and consider a coloring

of colors is finite. Ramsey’s theorem asserts that under these assumptions, there is an infinite subset

that is homogeneous or monochromatic for

, in the sense that

assigns the same color to all

. In fact, we have finitary versions of this result: For any

, if we only require that

has size at least

, then there is an

such that it suffices to assume that

has size at least

, the study of Ramsey numbers, the least

seen as a function of

, proves to be incredibly difficult and computationally unfeasible. For example, if

, then we know that

, but its exact value is not known.

be such that, for any for coloring of

colors, there is a monochromatic set of size

. We want to show that if

, then there is a monochromatic solution to the equation

. In fact, we claim that it suffices to consider

rather than the whole set of positive integers. Indeed, given a partition

, consider the coloring of

all have the same color. Now notice that

are monochromatic for the original coloring of

An easy inductive argument gives us that

, so this gives the upper bound

. To see the upper bound

, and verify inductively that

, and consider a coloring of

, and note that for some color

be the set of all these

. Note that if for some

is monochromatic with color

. Hence we may assume that the coloring, restricted to

colors. We are now done, since

. Indeed, from his proof, we obtain that

In terms of lower bounds, one can quickly check by induction that

and without monochromatic triples, we describe a coloring

, again without monochromatic triples. This gives the result. To define

Schur proved his theorem in order to establish a result related to Fermat’s last theorem, namely that it cannot be established by a naive argument involving modular arithmetic: Suppose that

. Then, for any prime

is large enough, then we also have that

. Hence, to prove that Fermat’s equation admits no solutions

, it would suffice to show that there are arbitrarily large primes

must divide one of

. What Schur proved is that this is not possible and, indeed, for any

and all sufficiently large primes

, there are nontrivial solutions to Fermat’s equation modulo

be the subgroup of

is union of cosets of

displayed sets are disjoint. Note that

, we have a monochromatic Schur triple, that is, there are

. But then there are

is a nontrivial solution to Fermat’s equation modulo

as a function of

. Fourier-analytic methods give here the best known bounds. Cornacchia proved in 1909 that

Let me close with an open problem: We could consider a multiplicative (rather than additive) version of Schur’s theorem: For any

colors, then there is a monochromatic set

. Indeed, this follows as a simple corollary of Schur’s result: Just note that

, since we could just color the powers of two and apply the additive version. what if we combine the two? It is still open whether in any finite coloring of

all receive the same color. This was originally asked by Hindman.

Please consult the conference webpage.
The 20-th meeting of BEST will be hosted at University of Nevada, Las Vegas, as a AAAS-PD symposium during June 16 (Sunday) – June 19 (Wednesday), 2013. It is organized by Liljana Babinkostova, Andrés Caicedo, Sam Coskey  and Marion Scheepers.

Contributed and invited talks will be held on Monday, Tuesday and possibly Wednesday at the University of Las Vegas, Nevada.

TRAVEL AWARDS:  Graduate students speakers, post-doc speakers and pre-tenure tenure track speakers are strongly encouraged to apply for to BEST for an NSF-funded travel award.  The travel expenses (airfare and lodging) of awarded speakers will be reimbursed up to the $700 maximum amount of the award, and registration fees of awardees will be reimbursed.

STUDENT SPEAKERS: BEST seeks to promote student participation in the conference via short (20 minute) presentations. To this end there are ten (10) NSF funded BEST travel awards available for students. To apply for one of these awards,

Student speakers are also  eligible for a AAAS-PD award of excellence for their presentation at BEST 20. Winners of these awards will be announced at the AAAS-PD banquet on June 18, 2013. Student participants will be guests at this banquet.

CONTRIBUTED TALKS:  The BEST schedule will also have a number of slots for 25 minute contributed talks. Anyone wishing to speak at BEST 20 should submit an abstract as soon as possible (prior to June 10) at the abstract submission site. It is strongly recommended to also contact one of the organizers as soon as possible to indicate interest/intention in presenting a talk at BEST 20.

DEADLINE 2: ABSTRACTS: Atlas Conferences, Inc. is providing abstract services for BEST 20. Abstracts submitted by April 24 will appear in the proceedings of the annual conference of the AAAS-PD. The deadline for submitting an abstract is June 10. To submit an abstract, follow this link.

LODGING: Las Vegas offers many lodging options. Please see the lodging page on the conference website for lodging suggestions by the AAAS-PD.

Because of this, I decided to take a look at Cardinal Algebras, a monograph by Alfred Tarski, né Alfred Teitelbaum, published by Oxford University Press in 1949.

Here is the closing paragraph of the Preface:

It would be impossible for me to conclude this introduction without mentioning one more name—that of Adolf Lindenbaum, a former student and colleague of mine at the University of Warsaw. My close friend and collaborator for many years, he took a very active part in the earlier stages of the research which resulted in the present work, and the few references to his contribution that will be found in the book can hardly convey an adequate idea of the extent of my indebtedness. The wave of organized totalitarian barbarism engulfed this man of unusual intelligence and great talent—as it did millions of others.

Adolf Lindenbaum was killed by the Gestapo in 1941.