It is easy to see that to show that

is countable, it suffices to show the countability of

There is a straightforward way of enumerating the latter: First list the fractions with denominator

, then those with denominator

(skipping those already listed), then those with denominator

Cantor’s  first proof of the uncountability of the reals (the nested intervals argument) from 1874 proceeds as follows:

Given any (injective) sequence

of reals, we want to exhibit a real that was not listed. There are two cases: Either there are

, and such that there is no

, in which case we are obviously done, or (more interestingly), whenever

strictly in between (the range of the sequence is dense in itself). Assume we are in this situation.

The construction just described ensures that if

It follows (from the completeness of the reals) that

, and (from 1.) that any real in this intersection is not in the range of the sequence

is the enumeration of the rationals in

we began with, then

is the golden ratio.

This is proved in the nice note

There is a very nice enumeration of 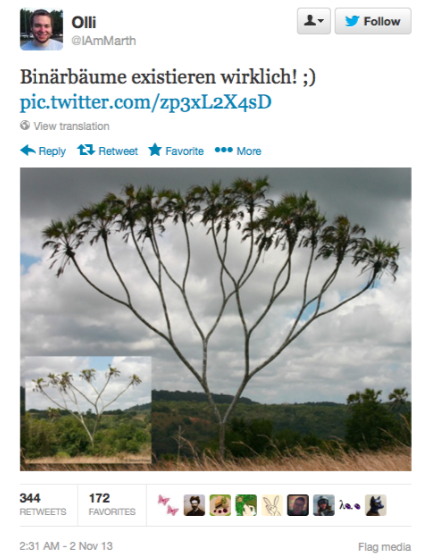 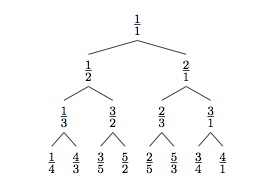 We begin by putting

at the root of the tree. Once a node has been labelled

, its left successor is labelled

, and its right successor is latex

The proof that this is indeed a bijective listing of

is remarkably simple; one verifies in order the following claims:

For this, one proceeds by induction. For example, if there is a fraction

not in reduced form, and used as a label, pick such a fraction appearing in as small a level as  possible, and note that the fraction cannot be

. A contradiction is now attained by noting that

appears in more than one node, then

, and its immediate predecessor (either

) must also appear more than once.

Finally, if some fraction is not listed, we can choose its denominator

least among the denominators of all skipped fractions, and then choose its numerator

least among the numerators of all skipped fractions with denominator

. A contradiction follows because

must also have been skipped, but

must have been skipped, but

This enumeration is due to Neil Calkin and Herbert Wilf, who also showed that it has the following nice combinatorial properties:

This is proved in the nice note

This entry was posted on Wednesday, September 18th, 2013 at 7:38 pm and is filed under 414/514: Analysis I. You can follow any responses to this entry through the RSS 2.0 feed. You can leave a response, or trackback from your own site.

One Response to Analysis – Counting the rationals