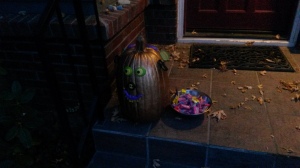 Starting Monday, you guys should be organized in new groups. No group can have three members that are together in the current groups. When I arrive on Monday, the groups should already be formed. You guys should start working on the laboratory on Polyhedra, Chapter 7. Make sure to bring whatever materials may be needed for this.

There have been complaints about not everybody contributing their share to their respective groups. This is not acceptable, but it is sadly the main reason for the reorganization. So: If I receive two complaints about a member not contributing as required, and there are no reasonable extenuating circumstances, that person will be dropped out of their group (receiving a zero in their current project as a result). If the issue is not expected to be resolved for the next report, a new reorganization of groups will be triggered as a result.

Also, I am unhappy with the level of some of the reports. It seems the peer reviewing of other groups’ drafts is not being taken as seriously as needed. So: Now, on the dates drafts are due, each group should bring three copies of their current draft. When you review another group’s draft, write the members of your group on the copy you are reviewing. I’ll collect the copies, with your comments, copy them for my records and return. If I identify something that a group should have noticed and mentioned, but did not, that group will be penalized (since this means the group did not take their refereeing role seriously). Conversely, if a group mentions something that should be addressed, but I do not see the issue resolved in the final report, the group that failed to address the given comments will be penalized.

Finally, this being a mathematics course, I expect your projects to include proofs. If a project lacks proofs it will receive a failing grade.

Feel free to contact me be email if any of the above needs clarifying.

287: Communication in the mathematical sciences |

José Iovino has asked me to help advertise the following:

At the 2015 Joint mathematics meetings (JMM), January 10-13, in San Antonio, TX, there will be two special sessions on model theory.

The first is Beyond First Order Model Theory, a special session of the ASL and the AMS. See here for the schedule, list of speakers, and abstracts.

The second is Model Theory and Applications. See here for schedule, speakers, and abstracts.

The first session will be preceded by a conference (with the same title) at the University of Texas, San Antonio. Additional details can be found here, the speakers are Will Boney (University of Illinois at Chicago), H. Jerome Keisler (University of Wisconsin – Madison), Michael Makkai (McGill),  Maryanthe Malliaris (University of Chicago), Paul Larson (Miami University), Chris Laskowski (University of Maryland), and Sebastien Vasey (Carnegie Mellon).

Just as the last two times I have taught 414/514, I am assigning a final project on the topic of continuous nowhere differentiable functions (see here and here for the previous times).

The project requires that you choose an example of a continuous nowhere differentiable function, and to write a report describing the function, indicating who first introduced it, and presenting complete proofs of its continuity and nowhere differentiability. Additional information relevant for context is highly encouraged.

I am including links to two encyclopedic references on the subject. Feel free to follow the arguments there closely if needed, or to consult other sources, but make sure that what you turn in is your own version of the details of the argument, and that full details (rather than a sketch) are provided.

As I mentioned before,

Please take this project very seriously (in particular, do not copy details from books or papers, I want to see your own version of the details as you work through the arguments). Feel free to ask for feedback as you work on it; in fact, asking for feedback is a good idea. Do not wait until the last minute.

The project should be typeset and is due Wednesday, December 17 (though I strongly encourage you to turn it in earlier).

Please contact me by email as soon as you have chosen the topic you are going to cover, and I’ll list it here, to avoid repetitions.

This set is due in three weeks, on Monday, November 3, at the beginning of lecture.

be increasing. We know that

has at most countably many points of discontinuity, say

. Some of these intervals may be empty, but for each

at least one of them is not. (Here we follow the convention that

denote the length of the interval

, and say that an interval

and, more generally, for any

is increasing and continuous.

is increasing, and its only discontinuity points are

Use this to provide a (new) proof that increasing functions are in Baire class one.

2. Solve exercise 3.Q in the van Rooij-Schikhof book: If

is such that for all

is the uniform limit of a sequence of step functions. The approach suggested in the book is the following:

Show that it suffices to argue that for every

there is a step function

To do this, consider the set

there is a step function

is non-empty. Show that if

. Show that in fact the second possibility occurs, that is,

. For this, the assumption that

exists is useful. Finally, show that

. For this, use now the assumption that

3. (This problem is optional.) Find a counterexample to the following statement: If

is the pointwise limit of a sequence of functions

, then there is a dense subset

where the convergence is in fact uniform. What if

are continuous?  Can you find a (reasonable) weakening of the statement that is true?

be the Cantor set in

not covered by this case, we define

is a Darboux continuous function, and that it is discontinuous at every point of

except at (some of) the endpoints of intervals

is in Baire class two.

Recall that a real-valued function

defined on an interval

) iff it is the pointwise limit of continuous functions.

Examples are continuous functions, of course, but functions in

do not need to be continuous. An easy example is the function

. This is the pointwise limit of the functions

. By the way, an easy modification of this example shows that any function that is zero except at finitely many points is in

Step functions are another source of examples. Suppose that

is constant on each

is the pointwise limit of the functions

as the restriction of

by joining consecutive endpoints of the components of its domain with straight segments.

An important source of additional examples is the class of derivatives. Suppose

. This is the pointwise limit of the functions

This simple construction does not quite work if

is defined on a bounded interval (as

may fall outside the interval for some values of

). We can modify this easily by using straight segments as in the case of step functions: Say

linearly in the interval

Additional examples can be obtained by observing, first, that

is a real vector space, and second, that it is closed under uniform limits (the latter is not quite obvious). This gives us, for instance, that all monotone functions are in

, since monotone functions are the uniform limit of step functions on bounded intervals: Given an increasing

. It follows that all functions of bounded variation are in

, since any such function is the difference of two increasing functions.

Another interesting source of examples is characteristic functions. Given

On the other hand,

, since it is discontinuous everywhere while Baire class one functions are continuous on a comeager set.