Benedikt Löwe and I wrote a survey of their current status, cleverly titled The fourteen Victoria Delfino problems and their status in the year 2019. The cleverness has forced us to keep changing its title as its publication date kept being postponed. It is scheduled to appear in the fourth volume of the reissued Cabal volumes, which I am told is expected to finally be published this year. The volumes are being published by the Association for Symbolic Logic and Cambridge University Press as part of the Lecture Notes in Logic series.

The survey can be accessed through the Hamburger Beiträge zur Mathematik preprint server; it is paper 770 there. It can also be found through my papers page (currently under notes, and later on, once it appears, under papers).

Shehzad is my most recent student, having completed his M.S. thesis on May last year. He is currently pursuing his PhD at Ohio University. His page is here, and he also keeps a blog.

-determinacy and sharps, is a survey of the Harrington-Martin theorem, showing the equivalence between a definable fragment of determinacy, and a large cardinal hypothesis.

After the fold, I review the basic notions, and give the tiniest of hints of what the theorem is and how its proof goes. Since the material is technical, the post is not really self-contained.

END_OF_DOCUMENT_TOKEN_TO_BE_REPLACED

Daniel was my first masters student, completing his M.S. in June 2010. I co-advised him together with my friend and colleague Ramiro de la Vega, at the Universidad de los Andes, in Bogota. The following picture is from his Facebook profile. 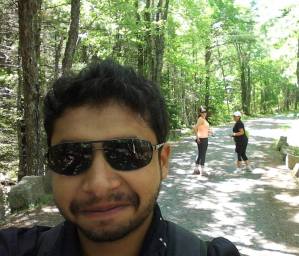 under the axiom of determinacy (in Spanish), is part of a vastly unexplored field: general topology in the absence of choice.

Work on this area has been mostly about highlighting pathologies, illustrating how vastly different results can be when we keep standard definitions but work in setting where the axiom of choice fails badly. Even in the setting of the real numbers with the standard topology, things may not work as expected: Every set of reals may be Borel (in fact

), there may be Borel infinite Dedekind-finite sets, etc. In his PhD thesis at UC Berkeley, Apollo Hogan showed that, instead, we can carry out a systematic and detailed study of general topology if instead of dealing with arbitrary models with absurd failures of choice, we concentrate on settings where the absence of choice is compensated by a rich combinatorial structure. Specifically, Apollo (who was a student at Berkeley at the same time I was there) considered topology under the axiom of determinacy. Daniel’s thesis is a survey of some of the results discovered by Apollo.

Daniel begins by reviewing some of the basic consequences of

, the axiom of determinacy. To state

, we need to consider certain ideal games between two players, that I will just call

. In all these games the format is the same: players

playing first. In each turn, the corresponding player picks a natural number, repetitions being allowed, and both players having knowledge of all the moves both have made previously. They play for infinitely many rounds. At the end, a sequence of natural numbers

has been produced, with

being the numbers picked by player

being the ones picked by

. We have one of these games for each set

is the set of all infinite sequences of natural numbers. In the game associated to such an

is a function that tells player

what to play each time. Formally, this is just a function from the set of finite sequences of numbers to

is defined similarly. We say that a strategy for

is winning if and only if player

wins the game whenever they play following the strategy. That is, in any such game we have

, etc, and at the end we have that

are defined similarly. We say that

is determined iff one of the players has a winning strategy.

It is easy to give examples of determined sets

. Using the axiom of choice, we can give examples of undetermined sets, but deep theorems in descriptive set theory indicate that no undetermined set can be particularly simple. For instance, it is a celebrated theorem of Martin that all Borel sets are determined. Here,

The axiom of determinacy is the statement that all

are determined. In particular, this statement contradicts the axiom of choice. See here for slides of a talk I gave a few years ago containing a quick introduction to the subject.

The short remainder of this post (after the fold) is by necessity more technical.

END_OF_DOCUMENT_TOKEN_TO_BE_REPLACED

This posting complements a series of talks given at the Set Theory Seminar at BSU from September 12 to October 24, 2008. Here is a list of links to the talks in this series:

I’ll use this post to provide some notes about consistency strength of the different natural hierarchies that forcing axioms and their bounded versions suggest. This entry will be updated with some frequency until I more or less feel I don’t have more to add. Feel free to email me additions, suggestions and corrections, or to post them in the comments. In fact, please do.