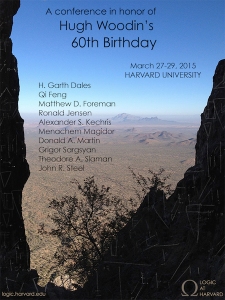 The conference in honor of Hugh Woodin’s 60th birthday will take place at Harvard University, on March 27-29, 2015. The meeting is partially supported by the Mid-Atlantic Mathematical Logic Seminar and the National Science Foundation. Funding is available to support participant travel. Please write to woodinbirthdayconference@gmail.com to apply for support, and to notify the organizers if you are planning to attend.

We expect to publish proceedings of the conference, together with select additional research and survey papers, through the series Contemporary Mathematics, of the AMS. The editors of the proceedings are myself, James Cummings, Peter Koellner, and Paul Larson. Please contact me for information regarding the proceedings.

Additional information can be found at the conference website.

On proofs and more

This is a transcript of an exchange on Twitter on what mathematicians and others expect from proofs. (A previous exchange on a different topic is here. Twitter produces surprisingly nice results sometimes. What follows is a bit meandering, but interesting points are made.)

It began at 7:56 am – 27 Jun 13, with the twitter account of Republic of Mathematics (a website started by Gary Davis) quoting from Bill Thurston‘s great essay On proof and progress in mathematics. The quoted sentence was a short excerpt from the following:

To this, the account of The True Beauty of Math replied with “[Which is] why computer proofs [are of] little use.” Republic of Mathematics objected to this position, and quoted from an article by Sara Billey titled Computer Proofs. What is the value of computer assisted proofs?. The quoted sentence is an excerpt from:

This was retweeted by Guy Longsworth, which is how I saw it.

END_OF_DOCUMENT_TOKEN_TO_BE_REPLACED

Woodin’s proof of the second incompleteness theorem for set theory

[Edit, Oct. 1, 2013: Robert Solovay has pointed out an inaccuracy in my presentation of Woodin’s argument: Rather than simply requiring that

is a hereditary property of models, we must require that

proves this. A corrected presentation of the argument will be posted shortly.]

As part of the University of Florida Special Year in Logic, I attended a conference at Gainesville on March 5–9, 2007, on Singular Cardinal Combinatorics and Inner Model Theory. Over lunch, Hugh Woodin mentioned a nice argument that quickly gives a proof of the second incompleteness theorem for set theory, and somewhat more. I present this argument here.

The proof is similar to that in Thomas Jech, On Gödel’s second incompleteness theorem, Proceedings of the American Mathematical Society 121 (1) (1994), 311-313. However, it is semantic in nature: Consistency is expressed in terms of the existence of models. In particular, we do not need to present a proof system to make sense of the result. Of course, thanks to the completeness theorem, if consistency is first introduced syntactically, we can still make use of the semantic approach.

END_OF_DOCUMENT_TOKEN_TO_BE_REPLACED

In October 24-November 14 of 2008, Richard Ketchersid gave a nice series of talks on quasiiterations at the Set Theory Seminar. The theme is to correctly identify `nice’ branches through iteration trees, and to see how difficult it is for a model to compute these branches. Richard presented a prototypical result in this area (due to Woodin) and a nice application (due to Jackson and Ketchersid). This post will be far from self-contained, and only present some of the definitions.

[Edit Sep. 25, 2010: My original intention was to follow this post with two more notes, on Woodin’s result and on the Jackson-Ketchersid theorem, but I never found the time to polish the presentation to a satisfactory level, so instead I will let the interested reader find my drafts at Lucien’s library.]

I’ll assume known the notions of extender and Woodin cardinal, and associated notions like the length or strength of an extender. A good reference for this post is Donald Martin, John Steel, Iteration trees, Journal of the American Mathematical Society 7 (1) 1994, 1-73. As usual, all inaccuracies below are mine. Some of the notions below are slightly simpler than the official definitions. These notions are all due to Donald Martin, John Steel, and Hugh Woodin.

In this post I present the main notions (iteration trees and iterability) and close with a quick result about the height of tree orders. The order I follow is close to Richard’s but it differs from his presentation at a few places.